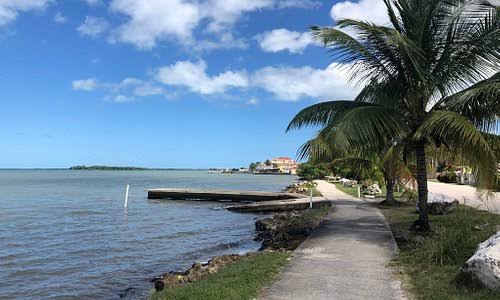 Belize is known all over the world not only for its breathtaking natural beauty, but also for its ancient monuments. Belize City in particular breathes history, the landscape is richly dotted with historical monuments and buildings.

In fact, there are many places in Belize City that take more than 2-3 hours to fully explore, such as:

Fort Street Tourism Village is specially designed for ship passengers to experience Belize in a unique way and is located near the Haulover Creek. Architecturally similar to an open-air mini-mall, the village has three terminals and three courtyards housing a house full of various shops and businesses, where tourists can enjoy the best of both worlds: air-conditioned facilities and a fresh tropical breeze.

Towering over the harbor entrance, the Baron Bliss Lighthouse Monument at Fort George Point is one of the main attractions in Belize City. This beautiful monument is actually a tribute to Belize’s greatest benefactor, Henry Edward Ernest Victor Bliss, the 5th Baron of Portugal. To fulfill his last wish, he was buried in front of the lighthouse. The view of the lighthouse can be enjoyed from the high seawall referred to as “Fort Point” by the fishermen and boaters.

St. John’s Cathedral, located on the south side of Albert Street, is the oldest building in Belize. In fact, this is the oldest Anglican church in the world outside of England where the coronations of several Kings of Mosquito Coast took place between 1812 and 1824. This beautiful church was built of red colored bricks that were brought to Belize as ballast by ships sailing from Europe.

Museum of the House of Culture

The House of Culture Museum in Belize City was once the residence of colonial governors and is now a history museum. It houses a permanent exhibition of classic furniture, historical photographs, authentic silverware and glassware. The building itself, built in the early 1800s, is a beautiful combination of Caribbean vernacular and English urban architecture.

Bliss Institute of the Performing Arts

Bliss Institute for the Performing Arts serves as the cultural center of Belize City. Initially it housed the Belize Arts Council, the library, and a museum of Mayan artifacts. However, after a recent renovation, it has taken on a role as the primary performance arm of the Museum of Belize. It hosts a wide variety of events such as theater performances, film festivals, dance troupes and community events.

Originally designed as a colonial prison in the mid-1800s, this historic two-story brick building on Gabourel Lane is today the Museum of Belize. It features a wonderful assortment of historical photographs, documents, and artifacts, along with a permanent display of ancient Mayan pottery and other archaeological finds. Today, the centuries-old prison cells are being restored to their original state, allowing visitors to relive the grim past.

The Supreme Court Building, built in 1926, is another landmark of Belize City. Constructed of reinforced concrete in a classic British colonial style with a domed clock tower, the Supreme Court building is a beautiful work of classical architecture. The building is located on the same site where the original courthouse was built in 1818.

The south and north sides of Belize City are connected by the Swing Bridge. This old bridge, built in 1922, is the only functional manually operated swing bridge in the world. Every day it opens twice to make a passage for sailboats and other large boats to navigate the river.

Apart from these places, there are many more places in Belize City that could attract you. This is a haven for history, anthropology and architecture buffs and the beauty of the place has even prompted many to move to Belize City permanently.